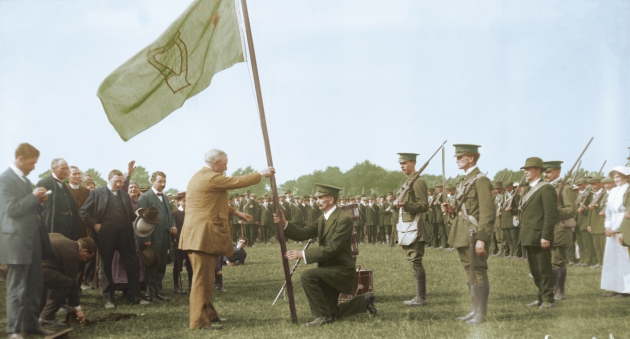 John Redmond with the National Volunteers

This two-part landmark series was developed and produced by Zampano Productions. It tells the story of Ireland’s struggle for independence exclusively through archive newsreel and photographs that have been painstakingly colourised and restored by the BAFTA nominated team behind WWII in HD Colour.

Sunday Times – ‘… the punched-up visuals brought fresh perspective, imbuing protagonists with a vibrant humanity they rarely are afforded by conventional documentaries. Rendered in living colour, the terrors and triumphs of the era seem like something that happened only yesterday.’

It was commissioned by TV3 with additional funding secured from the Broadcasting Authority of Ireland.

The series is distributed world-wide by British Pathé and Off the Fence.

Irish Delegation to the Peace Conference at Versailles, 1919